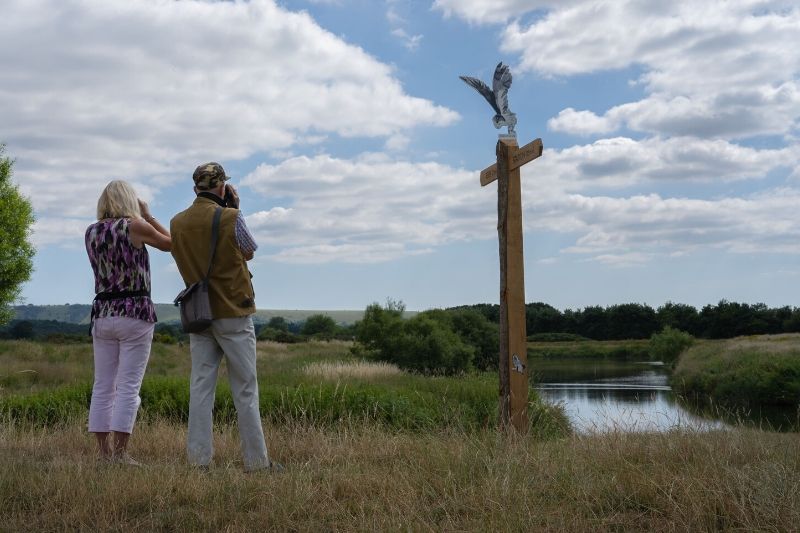 This four-kilometre trail stretches from Pulborough Station to the RSPB Pulborough Brooks Nature Reserve. Along the way you’ll spot sculptures, information about local history and wildlife, and if you download the Pulborough WildArt Trail app you’ll get to meet the Pulborough Giant! Popular with kids and adults alike, the giant will show you his favourite places along the trail.

You can walk there and back, or walk the route in sections and return by Compass 100 bus (Monday to Saturday). View the bus timetable here.

Please note that parts of the Brooks can flood during periods of heavy rain. The trail is always accessible in the village of Pulborough and at the RSPB nature reserve.

Download our Pulborough WildArt app for even more interactive fun along the trail. The app features a quiz and a guided tour from the Pulborough Giant himself!

The app was developed by Spark, a company that specialises in CGI creation, augmented reality and mobile apps

The app is currently not available to download for Android devices.

Once you have downloaded the free app to your phone you will see the full trail map with all the sculptures and imaginative signage and plenty of commentary on the area’s wildlife and points of geological and historical interest.

The app will also be a good educational tool for younger people and will include a bespoke quiz.

A unique entertaining augmented reality (AR) experience along the trail will see children meet and interact with 3D augmented characters, encouraging them to engage with wildlife and nature.

Throughout the route the trail will be marked by high quality sculptures, way markers and themed information boards highlighting the local geology and wildlife along the way. Throughout the trail you will be guided by the friendly Pulborough Giant.

Here a couple of the wildlife artworks that you will be able to find on the trail, but there are many more to find! Which ones have you spotted?

Named after its distinctive armoured head, the Minotaur Beetle can often be found lurking around the labyrinthine tunnels of a rabbit warren. It grows to about 20mm long, and feeds on the droppings of rabbits and other small mammals.

A design which has remained largely unchanged for millions of years, the Emperor Dragonfly is an incredibly successful predator that was once nearly a meter across, when the atmosphere contained higher concentrations of oxygen.

This sculpture is a calligraphic interpretation of individual frames from a slow motion movie of a bat catching a moth. As the bat closes in using echolocation, it scoops the moth up with its wings and tail, like a closing umbrella, bringing it within range of its fearsome teeth.

Male adders have a more black and grey colouring, hence Blackadder. During spring you can sometimes witness two entwined males, not so much dancing as wrestling, as they compete for the attentions of a female.

View a map of the trail below. 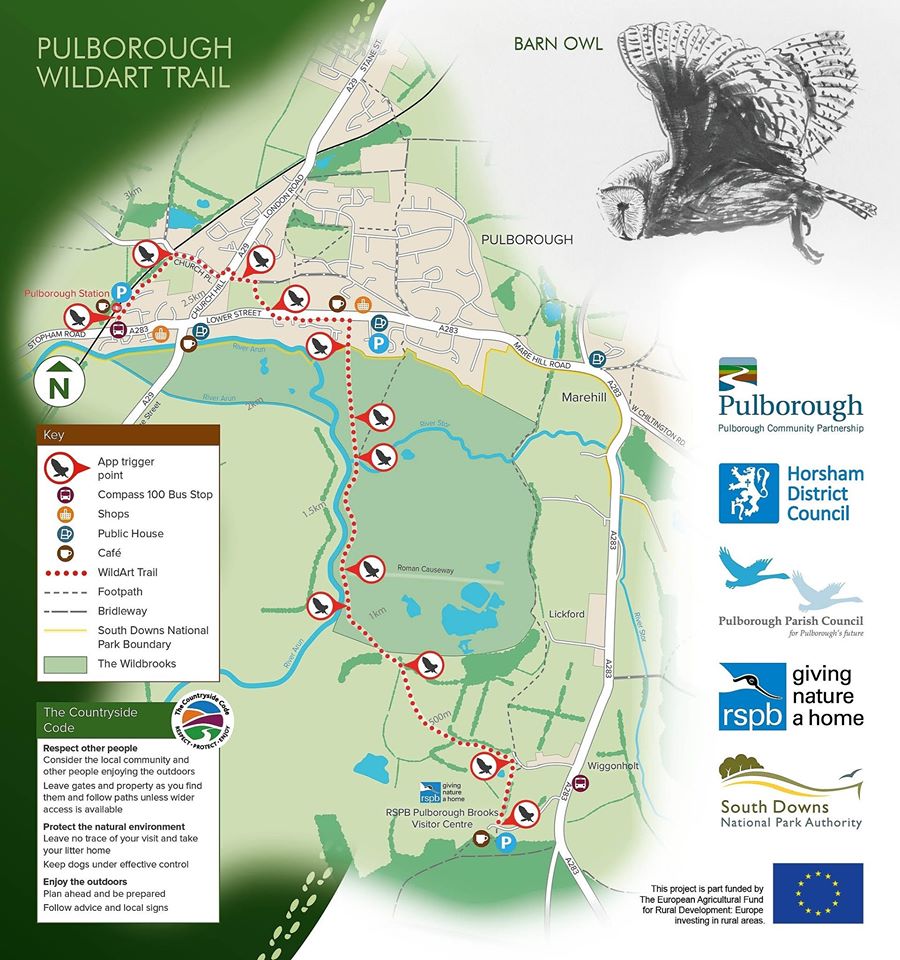 The man behind the art

Steve Geliot has been commissioned to make context-specific art and film across the UK and further afield for over thirty years.

His enduring interest in landscape and natural form began when he was a teenager growing up in the hop fields and nut platts of Kent.

The wildlife characters that inspired Steve at Pulborough were often witnessed during his habitual nightwalking expeditions, or at dawn and dusk, when much of the real drama takes place, and the senses are more alive to what is going on around us.

Visit Steve Geliot's website to find out more about his work.

This project is part funded by the European Agriculture Fund for Rural Development: Europe investing in rural areas.

The way markers were created by Fitzpatrick Woolmer who provide signs and way finding solutions for a wide range of outdoor spaces.

Something completely different for Pulborough, we think it will be a real hit with people of all age groups and will bring a boost to Pulborough’s economy as visitors discover the area afresh.

The App is available to be downloaded free to the mobile phones of participants to enable them see the full trail map with commentary.

In downloading and using the App, no data on the users or usage of the App is recorded and transferred to cloud or online services.

The local device stores which waypoints have been scanned but this is used only for the requirements of the App in knowing where users have visited on the trail. This data is not transferred online and is only held on the user’s local device.

Horsham District Council fully committed to complying with The Data Protection Act 2018 and the General Data Protection Regulation (GDPR). We ensure that your personal data is processed fairly, lawfully kept safe and secure and retained for no longer than is necessary.